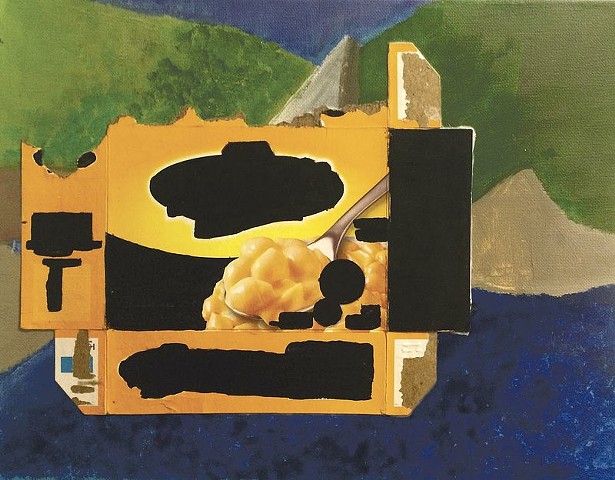 10:30 musical performance by Er-Gene and Ryan Redacted Marketplace, the second installation to date of Ben Edwards’ series of original paintings #Redacted, will open to the public Friday June 3, 2016 at 8 a.m. This all-day event will be held in conjunction with First Friday Bentonville, and a reception for the exhibition will begin at 6 p.m.

The installation has the familiar feel of a small, independently owned and operated retail store. Staffed by the artist, viewers have the option to purchase paintings and other objects in the same direct way as in a typical retail environment. Edwards’ art utilizes found and scavenged post-consumer materials, and he will be creating new paintings during the run of the exhibition as time permits. The viewer is presented an entire experience to navigate, the marketplace, and also has the opportunity to explore the hundreds of artworks created for the exhibition deciphering each’s individual meaning and discovering their own connections to the materials and content.

The #Redacted series is created upon box packaging disposed of by the artist and his family. In preparation for the exhibition, a small cadre of local women collected boxes from their own homes to contribute to the ongoing production of paintings. Begun in 2013, #Redacted series paintings have also been installed at 21C hotel in Bentonville, where they will be on view until August 28. #Redacted is anti-corporate Pop Art, reinterpreting classic 20th century pop-art forms and techniques, providing biographical, regional, and American narratives and reflections.

During open hours each day, actors will present a 10-minute play by Ashley Edwards adapted from an interview with the artist. This live theatre piece reveals additional insight behind the process of making the #Redacted series of paintings. It places a performer playing the role of the artist, into the same space as the artist himself creating a work of art in the present. The context given by the play overlaps with the installation’s ever-changing reality.

About Ben Edwards: A visual artist, art educator, and advocate for the arts in Northwest Arkansas. He is the founding member of the city of Bella Vista's Art Advisory Council and previously served on the inaugural staff of Crystal Bridges Museum of American Art as its exhibition programs coordinator. An instructor of ceramics and drawing at Northwest Arkansas Community College, he has facilitated numerous workshops throughout the region on ceramic and painting techniques.

His work is contained in the Kesher Collection at the State University of New York, Genesee; the Gann Museum collection of Arkansas Potter; and the University of Arkansas; as well as numerous private collections throughout the United States and Europe. Examples from his series of paintings titled #Redacted are on view at 21C Museum Hotel in Bentonville, Arkansas through August 2016. He received his BFA in Studio Art from Louisiana Tech University and his MFA from the University of Arkansas. He has been married since 2000 to playwright Ashley Edwards. They have four children and live in Bella Vista, AR. https://bedwards.carbonmade.com/projects/5368745