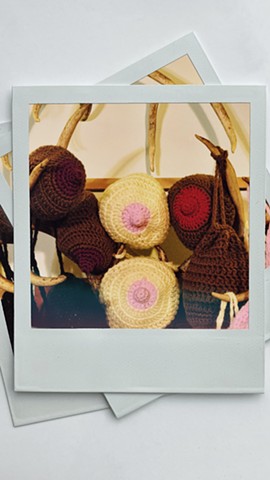 Fayetteville, AR, August 2022—Experimental artist, Kat Wilson teamed up with local crochet artist, Tina Oppenheimer to create wearable art for the upcoming festival season in Northwest Arkansas. On a whim, Oppenheimer knocked on Wilson’s door in 2018 asking how she could become one of the subjects for Wilson’s long-running Habitat series. Wilson photographed her the next week and the pair have been mixing creative energies ever since. While shooting Oppenheimer for her popular photograph series, Warrior Women, Wilson noticed a theme emerging—Tina’s titty. Exposed and documented in a decade’s worth of photographs at events throughout NWA, Oppenheimer’s gentle exhibitionism gave birth to a quite kooky and tiny bit genius idea. Wilson says, “The idea for Titty Bags started with a rough sketch in my studio.” Oppenheimer drafted pattern after pattern until the two agreed it was just right. Every morning she wakes up to crochet a nipple and soon Oppenheimer recruited a group of women armed with yarn and crochet hooks for their growing demand. Wilson’s enthusiasm for the region and its culture is evident, “I want Arkansas to show up and be weird at FORMAT Fest! Titty Bags are so many things: a spectacle, feminist, gender nonconforming, and fun as hell!" It’s all about the process for Wilson, if the final product is useful to someone—even better. She compensates crocheters per boob. This is the kind of project where Wilson’s vision thrives— informed by creative relationships, deeply personal, and full of kitschy charm. Titty Bags are designed to tote all your festival-going necessities—keys, tickets, fun-sized goods. Titty Bags are just one of the projects Wilson has developed for her movement Part(ty) Art, community-built public artworks brought to life by engaging a diverse group of participants in an act of art. Elaborate and interactive, Wilson’s #selfiethrone is another project in the movement. #selfiethrone employs elements of photography, sculpture, and performance art to blur the line between self-empowerment and self-obsession. A new selfie throne, adorned with neon lights and crafted by local sign-maker and artist Derrick Maxey, debuts September 22, 2022, as part of FORMAT, a multidisciplinary festival welcoming a diverse range of globally renowned international and local musicians and artists, alongside emerging talent and a myriad of special performances and surprise acts. Titty Bags launch on August 2, 2022. You can grab your Titty Bags ahead of FORMAT at pink House Alchemy in Fayetteville and online (INSERT LINK). For updates on Kat Wilson, Part(ty) Art, and FORMAT follow @katwilsonartist and @format_festival.